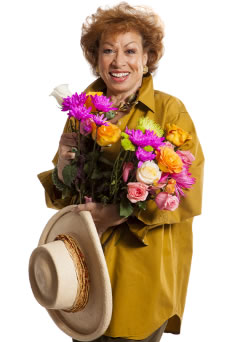 True Love
She keeps fresh-cut flowers in every room—something Maynard loved so much, he wrote a poem for her.

Valerie Richardson Jackson is known for the many hats she wears, figuratively and literally.  To Jackmont she is known as Chairman of the Board and Principal.  Throughout her life, she has embodied an innovative spirit and blazed a path of firsts for African-American women. She was among the first African Americans hired as a telephone operator by the Chesapeake and Potomac Telephone Company while a student at the high school where she and her two brothers integrated in the early sixties – all the while dealing with daily racial harassment and intimidation. After receiving a BS in business management from Virginia Commonwealth University, she established the first clerical training program for the Neighborhood Youth Corps in Richmond, VA. Upon being offered a scholarship, she earned an MBA from the prestigious Wharton School of Finance and Commerce at the University of Pennsylvania. Valerie also was the first African American to hold the positions of marketing account executive with Grey Advertising in New York and regional marketing supervisor for Trans World Airlines, also in New York.

Never one to rest on her laurels, Valerie served as special advisor to the Mayor's Office of Economic Development during her tenure as Atlanta’s first lady. She represented Atlanta from Moscow to Lagos. Her direct efforts helped to bring the Democratic National Convention to Atlanta in 1988. Valerie also served as co-chair of the Children's Olympic Ticket Fund, a non-profit foundation established to purchase and distribute Olympic tickets to over 20,000 financially challenged children.

Valerie is no stranger to the public eye – or ear. Her voice is recognized as that of the award-winning host on the National Public Radio (NPR) station WABE's, “Between the Lines” and “Valerie Jackson in Conversation,” a series of conversations with some of the brightest and most notable writers and thinkers, including Maya Angelou, President Jimmy Carter, Cornel West, the Honorable Hillary Clinton, and Deepak Chopra.

On her full plate over the years, Valerie has served on numerous boards, including the American Cancer Society, Habitat for Humanity, Northwest Georgia Girl Scout Council, and Georgia Chapter of the International Women's Forum. Currently, she is the board chair and principal teacher at the Maynard Jackson Youth Foundation’s Leadership Academy.

Not unsurprisingly, Valerie has won many awards. She was recognized by the Mayor's Office of Atlanta and the Governor's Office of Georgia for her profound commitment to service. She was named one of the 100 Women of Influence in Atlanta by the Atlanta Business League and included in the 100 List of Georgia's Most Powerful and Influential Women by the Women Looking Ahead magazine. She also is a member of the YWCA of Greater Atlanta's Academy of Women Achievers and was appointed in 2003 by Georgia’s Lieutenant Governor to the board of the Georgia Commission on Women.

Valerie shared over 25 years of marriage with the late Maynard H. Jackson, Jr., Mayor Emeritus of Atlanta, and lives in Atlanta, GA. Their daughters Valerie-Amanda and Alexandra live in Los Angeles, CA.