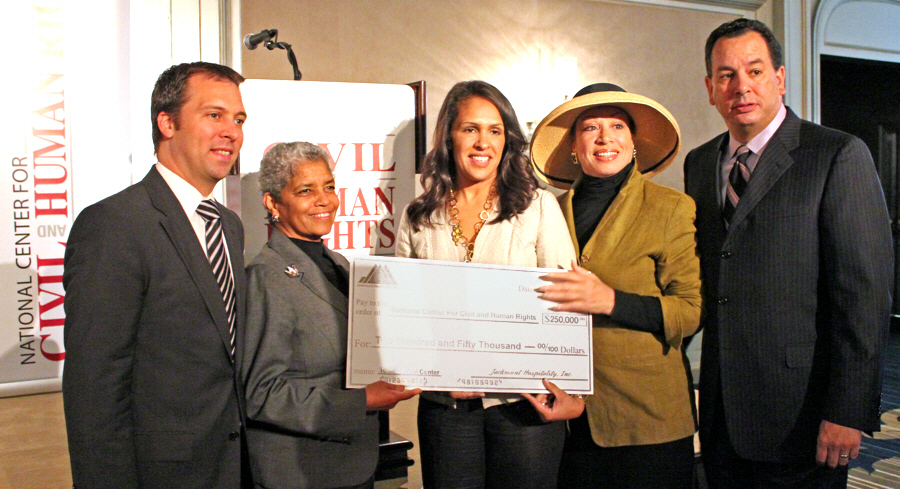 It takes a village to support a community. Jackmont Hospitality believes in using our talents and resources to improve the well-being of people in our communities. From our corporate headquarters, we support numerous national and local charitable and non-profit organizations, including the Atlanta Victim Assistance, Inc., National Center for Civil Rights & Human Rights, Hughes Spalding Children’s Hospital, National Black Arts Festival and the Foundation for the Advancement of Music Education, Inc. We also support and encourage our franchise stores to participate in local causes, including teacher and student certificate programs, school supply drives, holiday toy drives and numerous other fundraising efforts. We are prominently involved in the following organizations:

In 2011, Jackmont Hospitality bestowed a gift of $250,000 to the National Center for Civil and Human Rights in honor of our co-founder, the late Maynard H. Jackson, Jr., and his legacy of encouraging business ownership among African Americans. Jackmont Hospitality is leading an effort among minority business owners to raise $2.5 million dollars through a matching gift campaign to help support the building of the Center. The National Center for Civil and Human Rights is a cultural institution that commemorates the historic struggle for African-American freedom and equality, and serves as a space for ongoing dialogue, study, and contributions to the resolution of current and future freedom struggles of all people at the local, national, and international level.

The mission of the Maynard Jackson Youth Foundation is to build the foundation for youth today to become leaders of tomorrow. Through the signature program, the Leadership Academy, metropolitan Atlanta high school students learn the skills and principles of leadership, critical thinking, entrepreneurship, community service, and how to prepare for their continued education and careers. The Foundation was created in 1992 by Jackmont Hospitality Co-founder, the late Maynard H. Jackson, Jr., and is currently run by his daughter, Jackmont Hospitality Executive Vice President and Co-founder, Brooke Jackson Edmond. Valerie Richardson Jackson, Mr. Jackson’s widow, is chairman of the board. Jackmont Hospitality reserves a percentage of our profits to support the Maynard Jackson Youth Foundation, as well as other non-profit organizations.

The TGI FRIDAYS® Have a Heart Fund, affectionately called “Have a Heart,” is a 501c(3) charity created in 1997 by TGI FRIDAYS® team members to help fellow team members in need of financial assistance after experiencing an unforeseen tragedy, such as illness, natural disaster, or fire. Over the years, the Friday’s team has taken pride in assisting each other in times of need. Have a Heart is a team member-driven, team member-funded charity.

We are “One family serving many.”